You might not imagine a tough World War II flying ace would open a restaurant called “Mimi’s,” but that’s exactly what happened in the 70’s. Arthur J. Simms flew spy missions over France during the war and helped liberate a small French town near Versailles.

After the war Arthur ran the commissary at MGM studios in Hollywood, stuffing the bellies of big-time celebs like Judy Garland, Clark Gable and Mickey Rooney. He later joined his son Tom in several restaurant ventures including one called “French Quarter” in West Hollywood. This was the prototype for the French-themed Mimi’s Cafe. In 1978, the first Mimi’s opened in Anaheim, California. 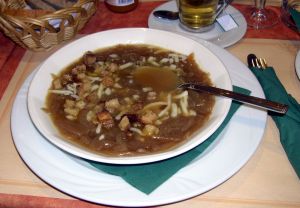 Today there’s over 40 Mimi’s in the chain with a new one opening every other week; all of them serving this amazing onion soup that can now be part of your culinary repertoire.

1. Sauté onions in melted butter in a large soup pot or saucepan for 15 to 20 minutes or until onions begin to brown and turn transparent.

2. Add beef broth, salt and garlic powder to onions. Bring mixture to a boil, then reduce heat and simmer uncovered for 1 hour. Add the grated parmesan cheese in the last 10 minutes of cooking the soup.

3. When soup is done, preheat oven to 350 degrees and toast the French bread slices for about 10 to 12 minutes or until they begin to brown. When bread is done, set oven to broil.

4. Build each serving of soup by spooning about 1 cup of soup into an oven-safe bowl. Float a toasted slice or two of bread on top of the soup, then add a slice of Swiss cheese on top of that. Place a slice of mozzarella on next and sprinkle 1 tablespoon of shredded parmesan cheese over the top of the other cheeses.

5. Place the soup bowl on a baking sheet and broil for 5 to 6 minutes or until the cheese begins to brown.

This site uses Akismet to reduce spam. Learn how your comment data is processed.